A Radical new idea!
The Enacom Tuning Disc CSS-1, the first of its kind in the world, is an unprecedented and advance enables the way music reproduction best. It doesn’t matter what kind of speakers and grade of the speaker system, Enacom Tuning Disc CSS-1 will bring out a whole new level of clarity and reality in music you have ever experienced.

How to use:
CSS-1 is designed to be used together with Speaker Enacom, be sure that Speaker Enacom has already been installed on your speaker.
1). simply place the CSS-1 in the tray of your CD player.
2). Select play mode and playback for about 10 minutes not more than 10 minutes. The listening volume of playback level may be a little higher than normal listening level (about between 9:00 to 10:00 o’clock) is suggested.
3).To do tuning is once in every 6 months in the beginning of first year, after that once a year.
After having been tuned the speaker systems with the CSS-1, a whole frequency range will become exquisite, sweet and so wider than ever before. The sound of violin and guitar became delineate and life like. CSS-1 includes all kind of frequency. When CSS-1 is in playback mode, the Disc produces strange sound like Potz, potz potz or other kinds, however, the sound is within compound of normal music signal and does not damage speaker systems.


* NOTE:CSS-1 may not be applicable to active speaker system with amplifier built inside the enclosure. 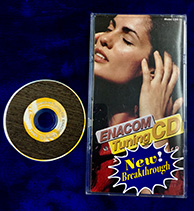 The voice of the dealer

AC Enacom, SP. Enacom is a very good product. When I purchased the CSS-1 New sold this time and immediately tried listening to it with a new display speaker, I feel that the movement of the diaphragm improved, and stiffness has disappeared and the amount of information has increased and it has improved very much. I would like to recommend it to customers in the future.